A growing number of coworking spaces in downtown Orlando has forced the closure of one of the city’s original places for budding entrepreneurs to set up low-cost offices.

The downtown coworking space Catalyst will shut down Wednesday after five years, bringing to a close one of the first startup-dedicated spaces in the region.
Founder Dennis Pape said he was “saddened and disappointed” but that the Catalyst’s closure was “not a total surprise,” as he said the city will see its coworking space grow from 40,000 square feet in 2017 to more than 240,000 square feet early next year.
Catalyst has served as a local meeting site for tech and entrepreneurial events like Orlando Tech and Beer, Florida Funders and Orlando Healthcare Innovators.
When Catalyst debuted, it was one of three locally run coworking spaces downtown, along with Colab and Canvs.
But in the past five years, spaces with ownership groups outside of Central Florida have been buying up empty space downtown.
New York City-based WeWork is expected to open a three-floor, 70,000-square-foot space at the SunTrust Center, 200 S. Orange Ave., early next year.
In addition, the entire 13-floor Angebilt Building was bought early this year by Chicago’s Novel Coworking.
Pape said his building’s owners have been accommodating as he decided to shut down Catalyst. Officials with the building’s broker said the lease for the space expires Wednesday.

“Catalyst opened to create a welcoming collaborative workspace community for Orlando entrepreneurs, scale ups, creatives, independent workers and others seeking to grow their careers and businesses by working in and taking advantage of serendipitous collisions and resources in our dynamic workspace,” Pape said in a release.

The space, on the fifth floor of 1 S. Orange Ave., has hosted more than 100 companies during its time.
Pape, who said market conditions forced Catalyst’s closure, did not reach out to renew his lease, which had initially been set to expire at the end of August.

“I think while Dennis was a front-runner in coworking in Orlando, other companies have come in and were more successful,” said Brian Wilson, manager of One South Orange’s management group. “We wish nothing but the best for Dennis.”

Pape has been part of a local effort to rebuild Startup Weekend Orlando, a weekend-long business building competition that has sent startups on to win national competitions for two consecutive years.
Catalyst’s signature program, VentureScaleUp, was a three-month mentorship-based program that ran 40 startups through a sort of boot camp for entrepreneurs.
In a Facebook group dedicated to Orlando’s tech community, local advocate Josh Murdock said Pape “helped create this entrepreneur tech community and supported it when others questioned it.”

Aaron Gray, managing director of the commercial real estate firm JLL, which oversees the property, said coworking space continues to be a viable option for the site.


“On a macro scale, we are strong believers of flexible workspace and the role it will play in the macro office environment, not just in Orlando but around the globe,” he said.

Get the latest industry news and information from CRE-sources delivered right to your email inbox! And we promise…no more than one email each morning. 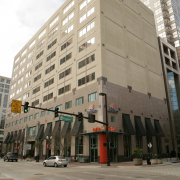